The Chicago PMI (ISM-Chicago Business Barometer) measures the performance of the manufacturing and non-manufacturing sector in the Chicago region. The Index is computed from five weighted raw indexes: Production (0.25), New Orders (0.35), Order Backlog (0.15), Employment (0.10), and Supplier Deliveries (0.15) and then seasonally adjusted to support month-to-month comparisons.

A reading above 50 indicates an expansion; below 50 represents a contraction; while 50 indicates no change. Chicago PMI is released one day before the ISM Manufacturing Index. This page provides the latest reported value for – United States Chicago PMI – plus previous releases, historical high and low, short-term forecast and long-term prediction, economic calendar, survey consensus and news. United States Chicago PMI – actual data, historical chart and calendar of releases – was last updated on July of 2019.

Earlier in the day the IHS Markit US Manufacturing PMI was revised higher to 50.3 in August 2019 from a preliminary estimate of 49.9 and compared to July’s final 50.4.  This out the manufacturing PMI lowest for almost a decade as export 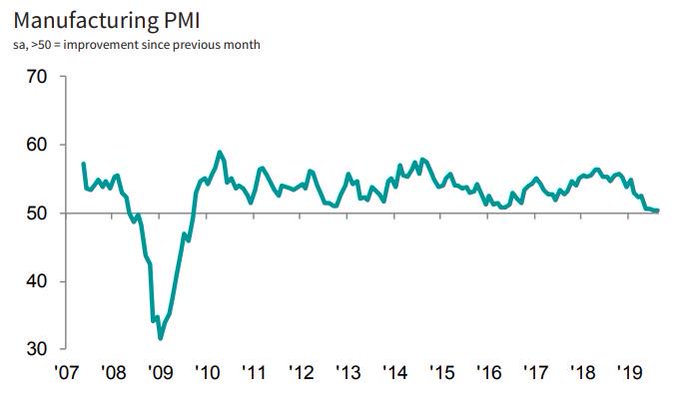 This reading pointed to the weakest pace of expansion in the manufacturing sector since September 2009, as new export orders fell at the quickest pace since August 2009, linked by many firms to trade wars and tariffs.

Business confidence dropped to a new series low. Manufacturing PMI in the United States is reported by Markit Economics.