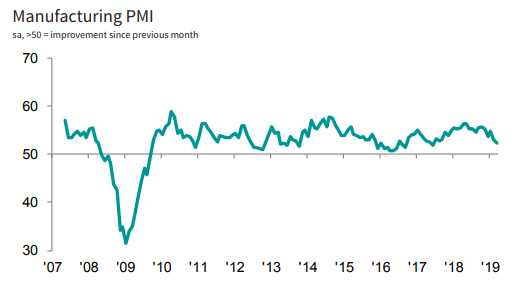 “The latest PMI signalled a moderate improvement in operating conditions across the U.S manufacturing sector in March, dropping to its lowest level since mid-2017 amid softer increases in output and new orders. Nonetheless, the rate of job creation remained solid despite broadly unchanged levels of outstanding business. Meanwhile, cost pressures eased further as the rate of input price inflation softened for the fifth successive month. Output charges also rose at a slower pace.”

“A futher deterioraton in the manufacturing PMI suggests the factory sector is acting as an increasing drag on the US economy. The March survey is consistent with production falling at a quarterly rate of 0.6% according to historical comparisons with official data.

“Encouragingly, companies report that at least some of the slowdown is due to capacity constraints, notably in terms of skill shortages. One-in-three companies reporting a drop in headcounts cited an inability to fill vacancies. Those looking for positive signals will therefore note that hiring remained encouragingly solid during the month and expectations of future output perked up, albeit still running below levels seen this time last year.

“However, things may well get worse before they get better, as the forward-looking indicators are a cause for concern. New order growth has fallen close to the lows seen in the 2016 slowdown, often linked to disappointing exports, tariffs and signs of increasing caution among customers. The ratio of new orders to existing inventory has meanwhile fallen to its lowest since June 2017, suggesting the production trend may weaken further in April.”

The ISM Manufacturing PMI rose to 55.3 in March of 2019 from 54.2 in February which was the lowest reading since November of 2016. Faster increases were seen for new orders, production and employment. Business Confidence in the United States is reported by Institute for Supply Management.

The Purchasing Managers Index (PMI)was developed in 1982 with the U.S. Department of Commerce, which measures new orders, production, employment and supplier deliveries