The emerging markets known as the ‘fragile five’; Brazil, India, Indonesia, South Africa and Turkey have shown that contagion is unavoidable when you are a high interest-rate economy with a trade deficit dependant on foreign capital to balance its books.

The emerging markets known as the ‘fragile five’; Brazil, India, Indonesia, South Africa and Turkey have shown that contagion is unavoidable when you are a high interest-rate economy with a trade deficit dependant on foreign capital to balance its books. In 2013 the U.S. Federal Reserve withdrew monetary stimulis in what was known as the “taper tantrum”. The move fed into emerging markets being sold off aggressively. Fast forward five years later and we see emerging markets being sold off as the Fed raises rates and the US dollar continues to rise. The fragile five are at the forefront but there are others affected, notably Russia and Argentina. Throw in sanctions, trade wars and political turmoil into the mix this time. The term “fragile five” came from Morgan Stanley back in 2013 in reference to the group of five developing economies that were suffering sharp outflows of foreign capital. The five countries were Turkey, South Africa, Brazil, India and Indonesia.

Each was all running current account deficits and were vulnerable to outside financial ‘whims’. Their currencies had sharp declines in the second half of 2013.  With the improving major stock markets from massive quantitative easing  risk appetites improves and with it investor sentiment towards emerging markets.  In 2016 investors, or more the banks such as Goldman Sachs pushing the paper were hopping back in. Some of the countries were making efforts to address their weaknesses and  markets looked at the fragile five. Greed and banker sales speak can only cover up reality so long and evidently it was all too soon.

We have seen recent waves of emerging market selling, Turkey at the forefront with US sanctions adding to the fuel, Brazil has come under attack from seemingly endless scandal and the contagion of Argentina. South Africa has been impoding for some time, not helped by collapsing metal prices.

Things appeared better in India and Indonesia with their strong growth and the appealing ‘real yields’ with what has been considered sound policymaking. However India’s rupee is hitting record lows and Indonesia’s rupiah is near levels last seen in the Asian financial crisis 20 years ago. Indian authorities have been attempting to smooth the rupee’s fall while Indonesia has been using intervention and applying  import restrictions and raising rates. The next big test for these currencies and for other emerging nations, and to a lesser extent, the more advanced economies is the flow on from the Trump administration tariffs on $200 billion, and possibily $467 billion of Chinese imports, eliciting retaliation from Beijing.

The US dollar has benefited from sanctuary flow as gold has failed to deliver, cryptocurrencies such as bitcoin collapsing and the Trump administration’s economic policies, intentionally or not, powering the dollar at a time when it usually cyclically weakens, even with the Federal Reserve increasing interest rates.

Trump’s tax cuts have stimulated the US economy as evidenced by the most recent ISM manufacturing and employment reports. However we have seen debt explode and the rise of financial assets on the back of record margin debt at historically unjustified and unsustainable levels. This has encouraged the repatriation of around a quarter of the US$3.5 trillion held overseas by American companies. This has in turn affected the emerging countries currencies and from their the contagion continues, like all rallies and falls it feeds on itself. The Indian rupee has lost more than 12 per cent this year to make it the worst performing Asian currency. The crash in the rupee has thus contributed to the recent increase in India’s inflation rate, this was also fed by the this year’s sharp recovery in oil prices, The Indian central bank to raise its benchmark interest rate twice in the past three months.

The Indonesian rupiah has fallen to its weakest level since the 1998 Asian financial crisis, down over 10.5 per cent against the dollar since the start of this year. In resposne Indonesia’s central bank has raised interest rates four times since May and intervened heavily in a bid to shore up the rupiah.

Matters are worse with the other members of the fragile five. In Brazil, with matters getting more uneasy daily as it braces for a highly unpredictable presidential election next month. Brazil’s Real has fallen 27 per cent against the dollar this year, Brazil is Latin America’s largest economy, the contagion affect is obvious as we see Venezuela affectively in total chaos and Argentina imploding finacially.

South African Rand is down 24 per cent this year. This is likely to get worse as last week data showed that South Africa’s economy fell into recession last quarter for the first time since 2009.

The Turkish Lira is in the biggest currency crisi of the lot and has helped trigger further selling in the other fragile 5. A financial meltdown is on process, contributing to broader emerging market asset class selling. In the latter stages of bullmarkets rationale is thrown out the door and it appears the fragility of the five economies has caught many investors and analysts by surprise.

“Since March, Argentina’s Peso is down 46% versus USD, while Turkey’s Lira is down 39%. Think about the difference. An IMF program and central bank hikes are defending ARS. Little comparable defense for TRY, which says to me the Lira is more likely to be undershooting fair value.”  Robin Brooks  via‏ @RobinBrooksIIF 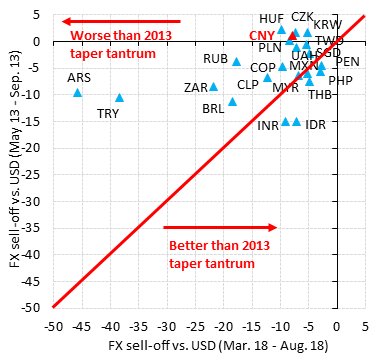 The reason for the surprise is that improvements were happening. The current account deficits of nearly all the countries, Turkey included have fallen as a share of gross domestic product since 2013. Up until the latest firesale currencies were  more fairly valued and central banks such as Indonesia had been responsibly tightening monetary policy at the expense of growth. Something for instance the Fed had been late to the party for.

However liquidity is an issue and most of the debt is in US dollars and much of the investments are leveraged and ‘fast money’.  Unless there is a huge turn in events this new currency crisis is but the beginning, The new valuations and rating is in danger of starting a new debt crisis, especially in corporate paper in Asian and the other emerging markets.

Dollar or other foreign currency-denominated debt such as the Yen or Euro becomes harder to service with local currency earnings losing value, thus the existing debt levels increase unless they were hedged. 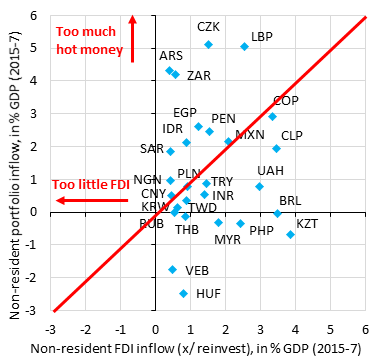 Sentiment can become self fulfilling for financial contagion increasing with the risk of capital flight on a large scale.  US bond markets are pricing in a much more dovish Fed next year on the grounds that the economy will slow, which may help weaken an already overvalued dollar. However has the damage been done in many ways and a hawkish Fed still pressures the upside of the US dollar.

The fragility of the fragile five remains fragile and the concern is not just the fragility of other emerging economies but the contagion to more developed economies from debt pricing and the unexpected consequences of the developing trade wars.

Be alert, be prudent and be open minded to an everchanging landscape.