$TTWO earned an adjusted 70 cents a share, up 3% year over year, under the consensus 64 cents. Net bookings were $411 million, up 1% year over year at lower end of guidance of $410 million to $460 million and under analysts expectations of $450 million.For the year GAAP net revenue rose to $1.793 billion and its GAAP net income more than doubled to $1.54 per diluted share. The OI Margin and EPS beat and F4Q was much better than the whisper going into the release. The result was seen as a ‘delay of earnings’ when the dust settled.

A gaming stock’s guidance is affected by the games they produce and when. As mentioned earlier the intial reaction from news algorithms and day traders didnt account for this. The “weak guidance” was due to the money tree, “Grand Theft Auto Online” being launched later. #TTWO’s guidance for net bookings in a range of $215 million to $265 million was over $100 million under expectations, because of the GTA Online release date in a later quarter.

With the delay in earnings with GTA FY20  should now benefit from 2 or 3 new non-Rockstar titles, re-orders (or PC version) of Red Dead 2, and growth in high-margin RCS.

Barclays in a note said “Overall, we continue to see upside from Red Dead 2 in FY19 and the two year EPS stack looks good with close to $5.00/yr and OI margins likely flat-to-up. We also still expect further multiple expansion as the Digital biz scales and margins improve. Our PT moves to $126 and we reiterate our OW rating.”

Wedbush in a note said “Despite its lowered guidance, we think that Take-Two has a clear path for earnings growth ahead. The delay of the unannounced 2K title bolsters our confidence that the company can grow earnings again in FY:20, as catalog sales of Red Dead Redemption 2, the launch of Borderlands 3, and growth from the core portfolio (including contribution from at least one Private Division title) should allow Take-Two to grow its top line by 5% or more and its EPS by 10% or more. Going forward, we expect a new BioShock title, new games from Rockstar, new titles from Private division, and continued growth of recurring revenue. We expect Rockstar to launch titles annually beginning in 2020 after a 5 year hiatus.

What is impressive with $TTWO is both Grand Theft Auto V and Grand Theft Auto Online remain among the company biggest contributors nearly four years after they were first launched for Playstation 3 and Xbox 360. NBA 2K18, WWE 2K18, WWE SuperCard and Mafia III all were top contributors. Red Dead Redemption 2 is an exciting addition for fiscal year 2018. 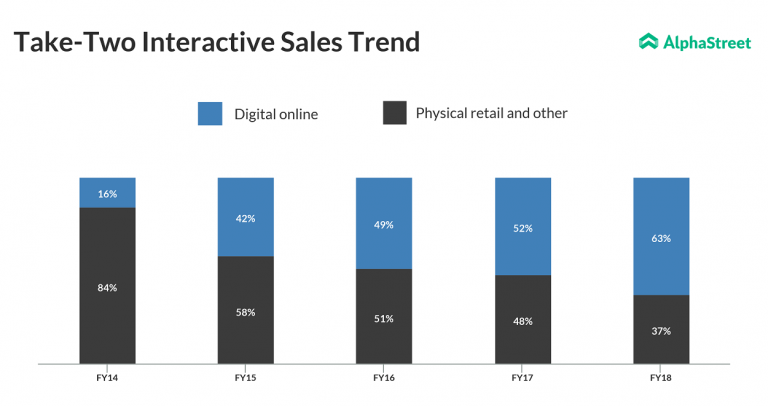 TTWO does great at keeping the customer happy, Net sales from recurrent consumer spending continue to make well over 50% of sales. 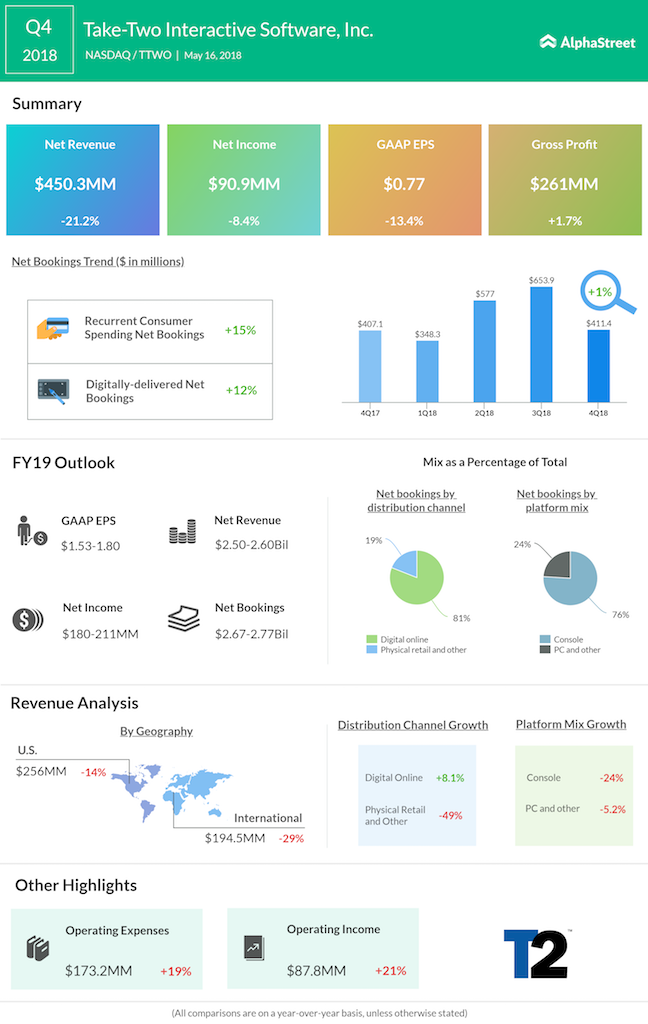 Take-Two guided to adjusted sales for the current quarter of $240 million, vs. the consensus view of $367 million for the quarter ending June 30.