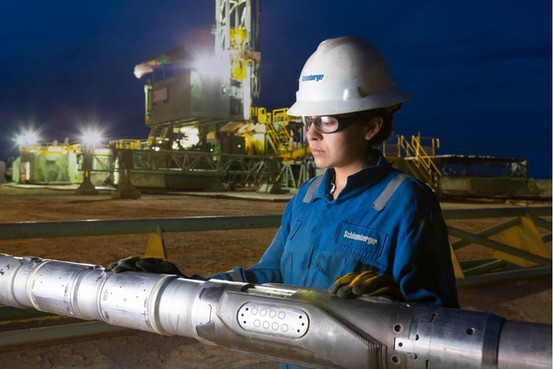 Houston-based oil service giant Schlumberger (SLB) reported adjusted second-quarter 2017 earnings above consensus. Hydraulic fracturing, or fracking revenue soared 68% from Q1 in the U.S. and $SLB is overcoming weakness in major Middle East projects. The company is seeing continued production improvement in Kuwait and Egypt with the increase in directional drilling in North America.

Earnings: Adjusted diluted quarterly earnings per share (EPS) of $0.35 on revenue of $7.5 billion. In the same period a year ago, Schlumberger reported adjusted EPS of $0.23 on revenue of $7.16 billion. Estimates were EPS of 30 cents with revenue uof  $7.26 billion. On a GAAP basis,  Schlumberger posted a net loss of $0.05 per share compared with a net loss of $1.56 per share in the second quarter of 2016 primarily due to a note charge for it’s largest Venezuelan customer. Impairment and other charges fell to $510MM from $2.57BIl in 2Q16.

Reaction: Schlumberger Limited. NYSE: SLB Jul 21 Lunch 67.41 +0.39 (0.+58%)
$SLB took a $510 million second-quarter impairment charge primarily related to a financing agreement with Schlumberger’s largest Venezuelan customer. This agreement resulted in the exchange of $700 million of outstanding accounts receivable for an interest-bearing promissory note. Schlumberger recorded this note at its estimated fair value on the date of exchange, which resulted in a charge.

Source: https://alphastreet.com/app#/company/SLB
Pre-tax operating margin increased from 10.4% in the year-ago quarter to 12.7% in the second quarter of 2017 and pre-tax operating income rose 25% to $950 million year over year.
Segment Revenue
The drilling division saw a 4% annual increase in revenues in 2Q17. Revenues of the production and reservoir characterization segments advanced 18% and 11% respectively, compared to last year. The Cameron group’s revenues fell 17%.
North America revenue jumped 27% from a year ago to $2.2 billion. Hydraulic fracturing revenue rose 68% from Q1 as completions activity intensified and pricing continued to improve. All U.S. land product lines were profitable due to higher pricing, market share gains, improved efficiency, resource additions, and supply chain management.
Europe and Africa revenue fell 10% annually to $1.75 billion but gained 6% from the Q1.
Middle East and Asia revenue slipped 2% annually to $2.35 billion but up 1% sequentially.
Latin America revenue rose 3% to $1.04 billion.

“While the activity outlook in North America for the second half of the year remains robust, we are now also seeing more positive signs in the international markets with increases in activity and new project plans starting to emerge in several GeoMarkets. The strengthening in the international markets has so far been concentrated around land activity in Western Siberia and in the OPEC Gulf countries but we are now also seeing an increasing number of new offshore projects being prepared for tendering and final investment decision (FID) in many of the world’s shallow water basins.” said Schlumberger Chairman and CEO Paal Kibsgaard in a statement.

Stock Repurchases & Dividends
SLB repurchased 5.5MM shares of its common stock in 2Q17, at an average price of $72.34 per share. The total purchase price is $398 MM. Schlumberger agreed to acquire a majority equity interest in Eurasia Drilling Company during the quarter. The company also approved a quarterly cash dividend of $0.50 per share on its common stock.
Guidance
Schlumberger expects to record capital expenditure of about $2.2Bil in fiscal 2017.  forecasts its US land activity will remain strong throughout the second half of the year. The cyclical nature of the oilfield services industry continues to be the biggest risk being faced by the company.
$SLB said it is on track to double its operating revenues in the next two years. In the next 12 months, the company plans investments worth $390MM in Argentina and $700MM in Nigeria. There are also plans to engage partners, through venture funds, for executing various projects, rather than depending solely on cash deals.
Source: SLB, AlphaStreet
Live From The Pit