The Federal Reserve Bank of New York August 2019 Survey of Consumer Expectations showed inflation expectations in August fell 0.2% to 2.4%. This is the lowest since the series began in 2013. The three-year survey fell to 2.5% from 2.6%.

The Federal Reserve Bank of New York August 2019 Survey of Consumer Expectations showed inflation expectations in August fell 0.2% to 2.4%. This is the lowest since the series began in 2013. The three-year survey fell to 2.5% from 2.6%

The Federal Reserve Bank of New York’s Center for Microeconomic Data August 2019 Survey of Consumer Expectations shows a decline in short- and medium-term inflation expectations. Expectations for one year ahead inflation, home prices changes, and changes in the price of medical care and rent all reached new series lows.

Below Are The Findings From The Report

The main findings from the August 2019 Survey are: 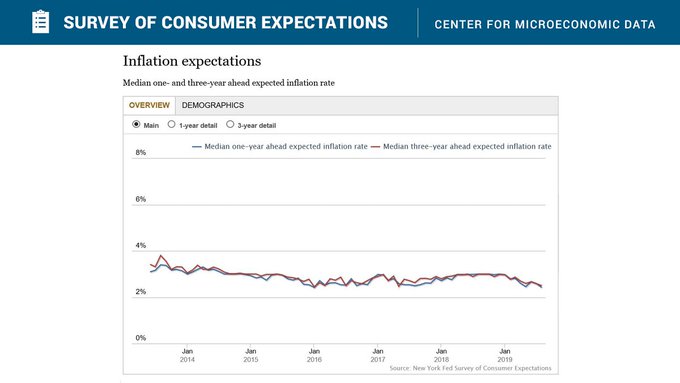 Median home price change expectations declined by 0.1 percentage point to a new series low of 2.9% in August. This is the first decline since December 2018, after eight consecutive readings of 3.0%. The decline was most pronounced among respondents over the age of 60, with higher education (at least a bachelor’s degree), earning higher incomes (over $100,000), and living in the Midwest.

Median one-year ahead expected earnings growth fell 0.1 percentage points to 2.3% in August, below the 12-month trailing average of 2.5%.

Mean unemployment expectations—or the mean probability that the U.S. unemployment rate will be higher one year from now—increased by 2.2 percentage points to 38.3%, exceeding its 12-month trailing average of 36.6%.

The mean perceived probability of losing one’s job in the next 12 months increased for the second consecutive month from 13.8% in July to 14.2% in August.

The mean probability of leaving one’s job voluntarily in the next 12 months decreased by 1.5 percentage points to 20.1%—the lowest reading since March 2018. The mean perceived probability of finding a job (if one’s current job was lost) increased slightly from 59.8% in July to 60.0% in August, above the 12-month trailing average of 59.5%. 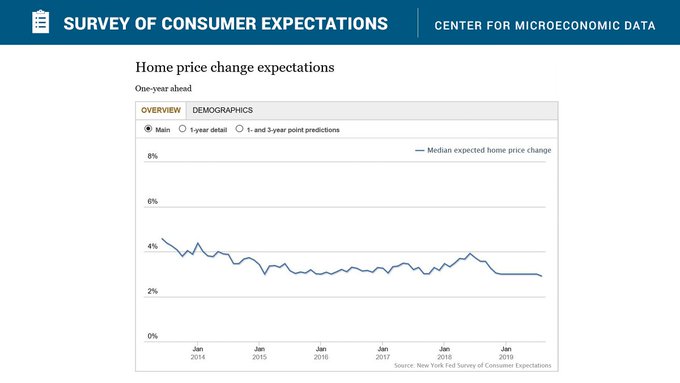 The average perceived probability of missing a minimum debt payment over the next three months decreased from 11.7% to 11.1% in August, remaining below the 12-month average of 11.9%. The median expectation regarding year-ahead change in taxes (at current income level) decreased for the third consecutive month from 2.7% in July to 2.3% in August.

The mean perceived probability that the average interest rate on saving accounts will be higher 12 months from now decreased to 26.5% in August, a new series’ low. 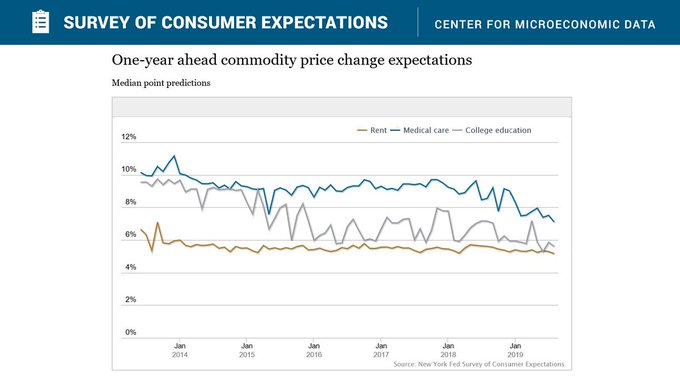 One-year ahead expectations, as well as perceptions about households’ financial situations, deteriorated in August, with lower shares of respondents expecting to be and reporting to be better off financially.

The mean perceived probability that U.S. stock prices will be higher 12 months from now decreased to 38.3% from 41.1%, the lowest reading since October 2016.

About the Survey of Consumer Expectations (SCE)

The SCE contains information about how consumers expect overall inflation and prices for food, gas, housing, and education to behave. It also provides insight into Americans’ views about job prospects and earnings growth and their expectations about future spending and access to credit. The SCE also provides measures of uncertainty regarding consumers’ outlooks. Expectations are also available by age, geography, income, education, and numeracy.

The SCE is a nationally representative, internet-based survey of a rotating panel of approximately 1,300 household heads. Respondents participate in the panel for up to 12 months, with a roughly equal number rotating in and out of the panel each month. Unlike comparable surveys based on repeated cross-sections with a different set of respondents in each wave, our panel allows us to observe the changes in expectations and behavior of the same individuals over time.