JPMorgan reported earnings at $2.34 a share on adjusted revenue grew to $27.822 billion. Higher interest rates boosted the results even with home lending revenue down. Fixed-income trading was sluggish. JPMorgan reduced its loan-loss provision to $948 million vs. $1.5 billion a year earlier.Analysts’ consensus estimates were f EPS of $2.26 and $27.64 billion in revenue. JPM has a 52-week range of $94.96 to $119.33. “We see good global economic growth, particularly in the U.S., where consumer and business sentiment is high,” CEO Dimon said. “Because of this broad growth and the strong underlying performance across each of our businesses, the company delivered record results this quarter. We also want to acknowledge that global competition is getting stronger.”

In May, the bank said it had submitted an application to the Chinese securities regulator for a new majority-owned securities business there. Last month, J.P. Morgan, Berkshire Hathaway and Amazon announced that Harvard professor Atul Gawande would lead the healthcare startup. 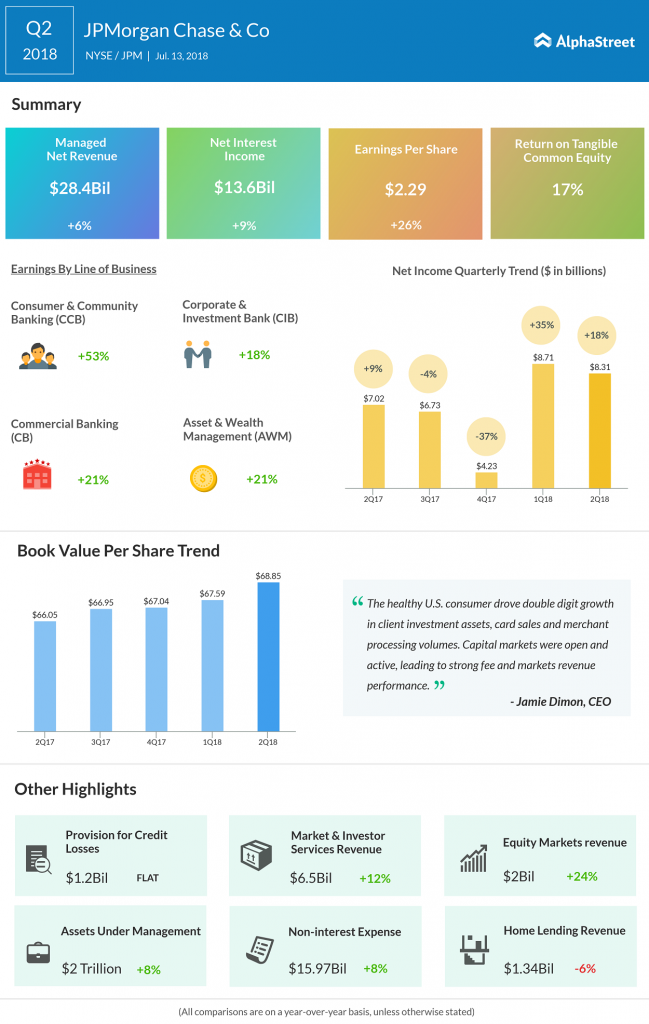 Bank stocks jumped earlier in the year after the largest U.S. banks passed Fed stress tests and were allowed to raise dividends and share buybacks. The Fed as it raise rates is helping banks’ finances giving their earnings a boost. However auto and student loans overhang the banking and finance sectors.