German manufacturing PMI fell to it’s lowest point in 7 years as the global trade war and Brexit drama weighed. Job creation slowed to its weakest since April 2015 with reduction in backlogs and lower confidence towards future output. /p>

German manufacturing PMI fell to it’s lowest point in 7 years as the global trade war and Brexit drama weighed. Job creation slowed to its weakest since April 2015 with reduction in backlogs and lower confidence towards future output. But Manufacturing Continues To Contract …. 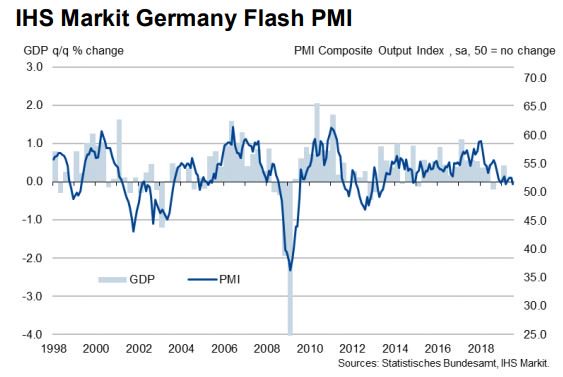 Inflation a Different Story in Manufacturing and Services

Growth of German business activity slowed in July as the country’s manufacturers recorded their worst monthly performance in seven years, according to the latest flash PMI® data from IHS Markit. The IHS Markit Flash Germany Composite Output Index – which is based on approximately 85% of usual monthly replies – fell to 51.4 in July. This was down from 52.6 in June and its joint-lowest reading in over six years.

Job creation meanwhile slowed to its weakest since April 2015 as firms reported an accelerated rate of reduction in backlogs and lower confidence towards future output. Manufacturing output fell sharply in July, registering its steepest drop since March and one of the most marked contractions since 2009. With new orders, employment and stocks of purchases also falling more quickly, the headline IHS Markit Flash Germany Manufacturing PMI registered a sevenyear low of 43.1, down from 45.0 in June.

“The health of German manufacturing went from bad to worse in July, according to the flash PMI data, raising the risk of the euro area’s largest member state entering a mild technical recession.

“The performance from Germany’s goods producers in July is the worst recorded by the survey in seven years, with the renewed weakness mainly stemming from an accelerated drop in export orders – the most marked seen in over a decade.

“Still solid growth in the service sector means that the German economy is just about keeping its head above water for now, but even here there are signs of increased worries among companies as optimism hit a three-and-a-half year low. “In a further sign of the slowdown in new orders and gloomier outlook affecting firms’ hiring decisions, July’s flash data showed employment rising at the slowest rate for over four years, with factory job losses accelerating.”