General Electric followed last week’s restatement of 2016 and 2017 earnings with first quarter earnings that came in better than already dialed down expectations giving relief to $GE shares. Aviation was the stand out, power the lagard.

General Electric followed last week’s restatement of 2016 and 2017 earnings with first quarter earnings that came in better than already dialed down expectations giving relief to $GE shares. Aviation was the stand out, power the lagard “The first quarter is a step forward in executing on our 2018 plan and we are seeing signs of progress in our performance. Industrial earnings, free cash flow, and margins all improved year over year. We reduced Industrial structural costs by $805 million and are on track to exceed our cost reduction goal of $2 billion in 2018.” Chairman and CEO John Flannery said in a statement 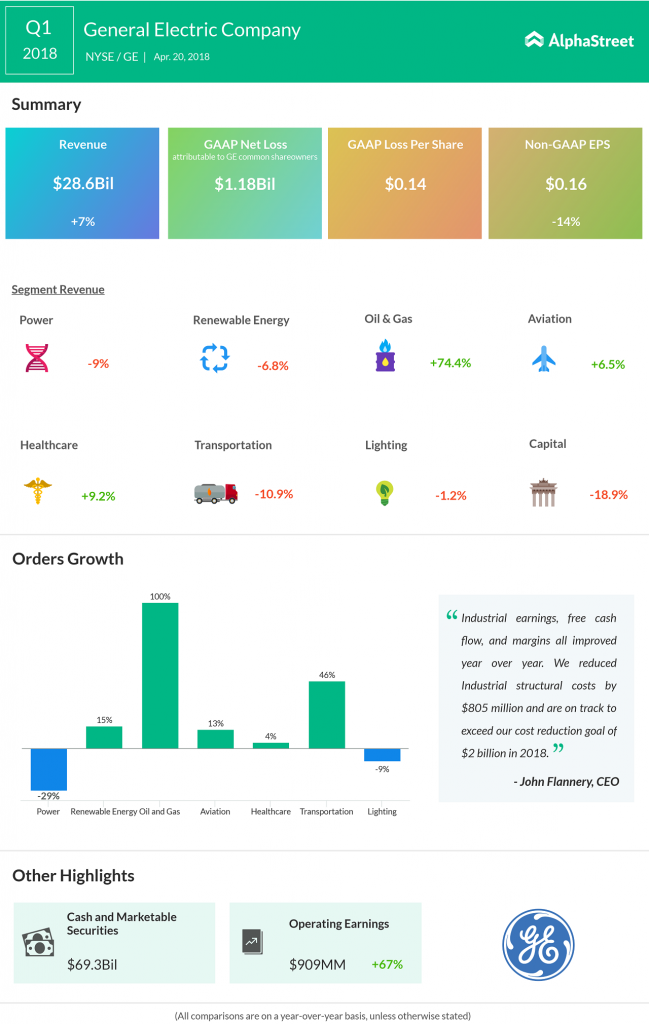 GE maintained its full-year EPS outlook which surprised many analysts GE sees EPS toward the lower end of its range.

Chief Financial Officer Jamie Miller on the $GE conference call said that the new reserve is based on settlement discussions GE held with the Department of Justice last month, as well as the precedent set by previous settlements by other banks. Deutsche Bank had estimated GE had $426 million set aside, while Bank of America said its model assumes about “$1 billion of cash outflow to settle” the WMC claims.

GE booked a $4.2 billion charge, restating earnings as expected and reduced EPS over the last two years by $0.30 The update follows its January 1 adoption of a new and required accounting standard, which affects how public companies recognize revenue from customer contracts.

$GE has previously estimated 2016 EPS would be lower by 13 cents and 2017 EPS would be lower by 16 cents after adopting the new standard. The restatement follows two a proxy battle that recommended GE shareholders reject longtime auditor KPMG on independence and performance. The earnings restatement was due by the ides of March however GE said it was taking longer than expected to determine the final number, not a positive sign.

General Electric shares lost over 3% keeping $GE as the Dow’s worst performer of the year to date, being down 25.2% so far in 2018. GE earlier last week announced it will sell part of its health care IT business to Veritas Capital for $1.05 billion. GE’s health care business had sales of about $19 billion last year, and the portion sold includes only the health care staffing and payroll services software.