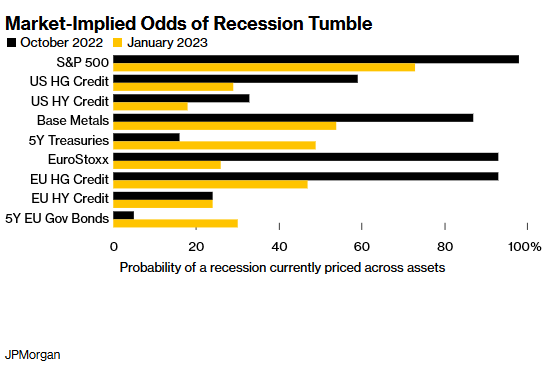 Global money managers are far from bullish on the economic trajectory with the S&P 500 still assigning a 73% probability that a recession will ensue. But that’s down from as high as 98% last year and it’s consistent with an uptick in wagers on a soft landing that sparked an earlier new year rally.

“Most asset classes have been steadily pricing out recession risks helped by China reopening, the collapse in gas prices in Europe and larger than expected inflation downshifting in the US,” said JPMorgan strategist Nikolaos Panigirtzoglou. “The market expects a much lower chance of recession than it did back in October.”

Panigirtzoglou’s own colleague, Marko Kolanovic, warns investors may be underpricing the potential pressure on stocks from a growth slowdown in the months ahead. At the same time bears can find fresh ammo in weaker factory output and retail sales as well as a bond rally, while Federal Reserve officials warned rates would remain in restrictive territory.

But thanks to a slow-burn rally of late, US high-yield credit has seen some of the sharpest repricing, with recession odds dropping to 18% from 33%. European markets have also suddenly danced to a bullish beat. The EuroStoxx index reflects just a 26% probability — down from 93%. JPMorgan calculates the metrics by comparing the pre-recession peaks of various classes and their troughs during the economic contraction.

Economists are not so upbeat. Their consensus forecast has jumped to 65% from 50% in October.