Elon Musk trial begins in San Francisco where he is sued by Tesla shareholders over infamous 420 Tweet
on Aug 7, 2018

“Am considering taking Tesla private at $420. Funding secured.”
He has already paid $20m to the SEC, $TSLA paid another $20m 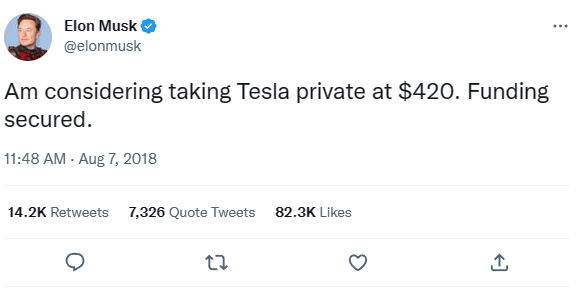 In 2018, he tweeted that he had “funding secured” to take the carmaker private.

However the funding was not secured – and Tesla was not taken private.

Shareholders argued that they lost billions of dollars due to the tweet after the share price plummeted.

The Tesla CEO, however, argued that he believed he had secured funding from Saudi Arabia’s Investment Fund, and did not commit securities fraud.

If a San Francisco jury rules in the shareholder’s favour, Mr Musk may be ordered to pay billions of dollars in damages.

He has already paid $20m to the Securities Exchange Commission (SEC) for the 7 August 2018 tweet, while Tesla had to pay another $20m.

The SEC also removed Mr Musk as chairman of Tesla as a result of the tweet.

Legal experts said they believe it will be a difficult case for Mr Musk to win, and that the fine he paid to the SEC will be used against him in the case. However jury trials in cases of fraud are notoriously difficult to predict.

Mr Musk had wanted the trial to be moved to Texas, arguing a fair jury would not be possible to find in San Francisco.

He argued that mass sackings at Twitter, a company he bought last year, affected many employees in San Francisco – and that he is not popular in the city.

Mr Musk’s team had argued that a significant majority of potential jurors said they viewed the billionaire negatively.

However, the judge said the trial would go ahead in California.