Hurricane season is heating up for 2017 with Tropical Storm Harvey due to turn into a Category 2 or 3 Hurricane through the Gulf of Mexico and to hit Texas. Traders, first responders, forecasters alike rely on data, artificial lintelligence machine learning is being used to improve forecasts. Hurricane season is heating up for 2017 with Tropical Storm Harvey due to turn into a Category 2 or 3 Hurricane through the Gulf of Mexico and to hit Texas. Traders, first responders, forecasters alike rely on data. Technology through artificial intelligence machine learning is being used to improve forecasts.

Natural gas and oil traders over the past few years have seen traditional weather services been thrown a loop at difficult and unpredictable weather patterns. Hedgers and speculators alike rely on this data extrapolation.

How do we make it better? There are more and more  satellites circling earth and we have multiple weather models that we are told are more powerful but many with limited success past 5 to 10 days out. We have included some favored analysts and forecasters tweeted images about Harvey, @EricHolthaus, @GasBuddyGuy and Cautious Investor, thank you.

This may have always been the case given the unpredictable nature of weather and the increased use of algoritms in trading exaggerating moves. There is of course the powerful climate political lobbies. One as a trader, indeed as a citizen has to trawl into those that are self serving or accurate and reliable.

Below the accuweather via Cautious Investor

In comes artificuial intelligence using deep learning and articial intelligance to give unbiasedand importanty un emeotional conclusions. Just like in other markets. Weather is i nherantly different there are so many possible biifications, blocking is just one for example.  Researchers have access to more and more dat, and today’s computers are enabling artificial intelligence (AI) to decypher and discovering climate patterns and improving forecasts. Think of those old Trade Station system mode scenarios and ratch it up endlessly.,AI systems performance as improves by the the amount of data analysed  in deep and machine learning.

“Claire Monteleoni, a computer scientist at George Washington University in Washington DC says “Climate is now a data problem,” who has helped pioneer the marriage of machine-learning techniques with climate science. The Scientific American reported “a single run of a high-resolution climate model can produce a petabyte of data, and the archive of climate data maintained by the UK Met Office, the national weather service, now holds about 45 petabytes of information, and adds 0.085 petabytes a day.”

Updated Harvey track with U.S. refineries. 8 in immediate path, ~30 or so total in possible cone/impact. via Patrick DeHaan @GasBuddyGuy 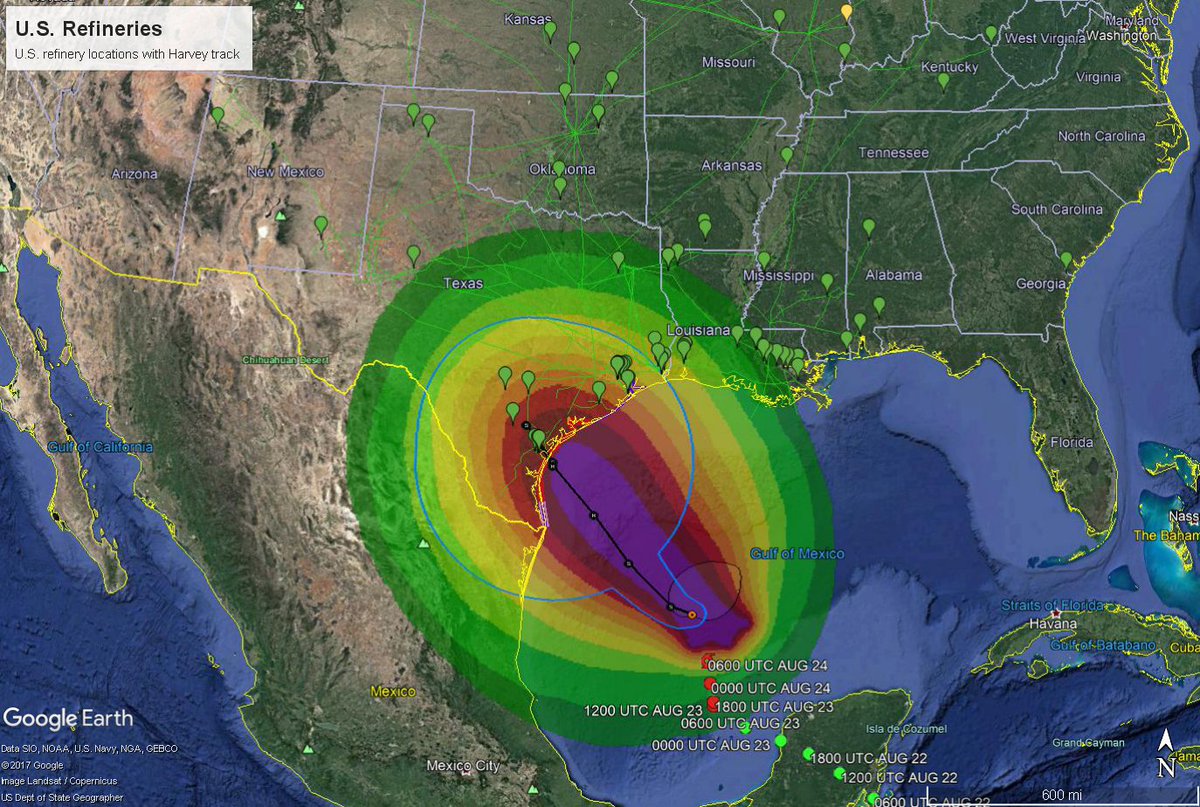 “Researchers have used AI systems to help to rank climate models, spot cyclones and other extreme weather events—in both real and modelled climate data and identify new climate patterns. “The pace seems to be picking up,” says Monteleoni.”

It is clear that conventional computer algorithms are not delievering reliablity the hope is machine learning and deep-learning systems. What these systems do is constently evalutae and determine through their own rules rather than conventiopnal subsets. If ever there was a messy data set it is weather witht he diffculty of converging patterns and data colelction. Think the extreme form thr eye of the hurricane to the mundane weatehr patetrns continents away. What we know is they all have some effect but determing the end alternatives conventionally has a huge beta ris not unexpected given the aforementioned complelxity of weather.

Suprisingly it was not until 2016 that researchers reported the first use of a deep-learning system to identify tropical cyclones, atmospheric rivers and weather fronts reports the Scientific American.

That feat showed that the algorithm could replicate human expertise. Now the team, which is based at Lawrence Berkeley National Laboratory (LBNL) in California, hopes to use similar techniques to study all kinds of extreme events—including ones not yet identified. The researchers’ ultimate goal is to better assess and predict how these events are shifting in the face of climate change. “It’s not simple,” says Prabhat, lead author of the 2016 paper, who directs big-data efforts for the National Energy Research Scientific Computing Center at the LBNL. “But it’s not as hard as the commercial applications for deep learning”, such as language translation and image identification.

Vipin Kumar, a computer scientist at the University of Minnesota in Minneapolis, has used machine learning to create algorithms for monitoring forest fires and assessing deforestation. When his team tasked a computer with learning to identify air-pressure patterns called teleconnections, such as the El Niño weather pattern, the algorithm found a previously unrecognized example over the Tasman Sea.

Monteleoni work interests me as a trader, hehas developed machine learning algorithms to create weighted averages of the roughly 30 climate models used by the Intergovernmental Panel on Climate Change. of note “By learning the models’ strengths and weaknesses, such algorithms generate better results than conventional approaches that treat all models equally, Monteleoni says”

There is a natural reluctance from forecasters as there are with traders using block box systems for stocks or commodities. William Drew Collins, a climate modeller at the LBNL. voices a common reaction; “I’m reluctant to use [AI] as an answer machine.  If I can’t explain what the machine is doing, then there’s a problem.”

Collins opinion is, “We need a benchmark of the level of detail that these models should be aiming for.  We need a guide star. Machine learning is well suited for that.”  He says AI algorithms are best suited to help test the next generation of climate models. What of the current ones?

There has been movement at the the AI algorithm weather forecasting station however  In  2016 computer scientist Amy McGovern of the University of Oklahoma in Norman and nine meteorologists from the US National Weather Service “chose to use an AI algorithm in about 75% of their forecasts of storm duration when given a choice between AI and conventional methods. They now plan to incorporate an AI algorithm into the weather service’s hail forecasts.”

So if you reside on the gulf coast like we do and your anxiety levels rise heed this from Collins “If you go to the major modelling centres and ask them how they work, the answer won’t be machine learning ..But it will get there.”

For mine who ever gets there first and if it it’s successful will be lauded as a genius.

Read: How Machine Learning Could Help to Improve Climate Forecasts