Rating agency Fitch warned debt limit games could put US AAA rating at risk. If US debt limit were not raised or suspended in time, political brinksmanship and reduce the financing flexibility could increased risk of sovereign default United States of America at ‘AAA’

Rating agency Fitch warned debt limit games could put US AAA rating at risk. If US debt limit were not raised or suspended in time, political brinksmanship and reduce the financing flexibility could increased risk of sovereign default United States of America at ‘AAA’ The U.S. sovereign rating is supported by structural strengths that include the size of the economy, high per capita income and a dynamic business environment. The U.S. benefits from issuing the U.S. dollar, the world’s preeminent reserve currency, and from the associated extraordinary financing flexibility, which has been highlighted once again by developments since March 2020. Fitch considers U.S. debt tolerance to be higher than that of other ‘AAA’ sovereigns.

With debt-to-GDP rising amid the pandemic, the fiscal picture for developed economies is worsening dramatically in 2020. Our Research analysts explore possible levers to alleviate debt burdens .via Barclays Investment Bank @BarclaysIB 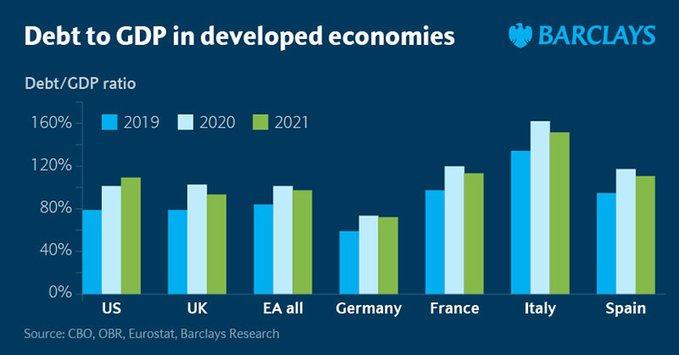 However, the Outlook has been revised to Negative to reflect the ongoing deterioration in the U.S. public finances and the absence of a credible fiscal consolidation plan, issues that were highlighted in the agency’s last rating review on March 26, 2020. High fiscal deficits and debt were already on a rising medium-term path even before the onset of the huge economic shock precipitated by the coronavirus. They have started to erode the traditional credit strengths of the US. Financing flexibility, assisted by Federal Reserve intervention to restore liquidity to financial markets, does not entirely dispel risks to medium-term debt sustainability, and there is a growing risk that U.S. policymakers will not consolidate public finances sufficiently to stabilize public debt after the pandemic shock has passed. Although a massive policy response has prevented a deeper downturn – such that Fitch expects a less severe contraction in the U.S. in 2020 than in many other advanced economies – the agency has revised down our macroeconomic projections since March and downside risks persist.

The U.S. had the highest government debt of any AAA-rated sovereign heading into the crisis, and Fitch expects general government debt to exceed 130% of GDP by 2021. Fitch’s debt dynamics analysis indicates that debt/GDP could stabilize temporarily from 2023 if fiscal balances return to pre-pandemic levels, but only assuming that interest rates stay very low. Health and social security costs are still set to rise over the medium-term while federal revenue in FY19 was close to its long-term average as a share of GDP.

Fitch expects the general government calendar year deficit to widen to over 20% of GDP in 2020. The agency expects the deficit to narrow to 11% of GDP in 2021 as economic support measures are rolled back. The cumulative federal deficit in the first nine months of FY20 (starting in October 2019) reached USD2.7 trillion, compared with USD747 billion in the same period of FY19. Spending rose by USD1.6 trillion, or by 49%. The Congressional Budget Office (CBO) estimated in April that the federal deficit would reach USD3.7 trillion in FY20. In the three months since this CBO estimate was published, Congress has made no major addition to the support packages. However, with Congress considering a further round of fiscal stimulus (Senate Republicans’ draft Health, Economic Assistance, Liability Protection, and Schools (HEALS) Act would provide further transfers to households and extend supplementary federal unemployment benefits at a reduced level), Fitch assumes that a further USD1 trillion in measures will be passed in August to be spread over FY20 and FY21.

The U.S. government has once again demonstrated exceptional financing flexibility, borrowing just under $3 trillion between the end of February and the end of June, of which USD2.5 trillion was in the form of treasury bills, while the Fed has intervened to backstop financial markets (expanding its balance sheet by USD2.6 trillion since mid-March) and boost global dollar liquidity. Amid a borrowing surge, borrowing costs have fallen, with the 10-year treasury bond yielding 0.6%. Marginal government borrowing costs currently average below 1% for up to 20 years. The effective interest rate on the federal government debt stock fell (by 0.75 percentage points (pp) compared with a year ago) to 1.75% by June 2020, and should continue to fall.

In line with our assumption that the Federal Reserve will hold its policy rate at 0.25%, Fitch expects negative real interest rates to provide some support to public debt dynamics. If real growth also reverted to 2%, a debt stabilizing primary deficit for the general government by 2024 could be around 3%-4% of GDP, comparable with 2019 levels. But it is uncertain whether very low market rates will persist once growth and inflation pick up. At current levels of indebtedness, a 1% rise in the effective rate on the debt would add 1.2% of GDP to the interest bill in a single year.

The future direction of fiscal policy depends partly on November’s presidential and congressional elections. The odds of Democrats overturning the Republican majority in the Senate have shifted in their favor over the past quarter, but it is unlikely that either party will achieve a 60-seat majority. A continuation of policy gridlock is a risk. Political polarization may weaken institutions and reduces the scope for bipartisan cooperation, hindering attempts to address structural issues (including some highlighted by the pandemic and protests) but also longer-term fiscal challenges. The economic crisis has likely brought forward the point at which social security and healthcare trust funds are exhausted, demanding bipartisan legislative action to sustainably fund or reform these programs.

Fitch expects the economy to contract by 5.6% in 2020 and recover by 4% in 2021, with the massive fiscal policy response averting a deeper downturn. Personal income rose in 2Q20, despite this marking the trough of the recession, marked by a historic fall in employment and hours worked. Real GDP nevertheless contracted at a 33% annualized rate, in line with Fitch’s expectations, and there are downside risks to Fitch’s growth forecast, with high-frequency data starting to show a greater impact from the pandemic in parts of the country where the public health response has been deficient and fading fiscal policy stimulus. Unemployment, spiked to 14.7% in April as firms shuttered and laid off staff, but declined to 11.1% in June as some of those on furlough returned to work. The prolongation of this stressful economic period will weigh on human capital, financial stability and future growth potential. The deepest post-war recession will not only open up a large output gap, but also take a permanent toll on potential GDP. As the output gap closes, Fitch expects growth to average 2.2% in 2023-25, above our revised estimate of potential growth.

Fitch expects inflation to remain low, averaging below 1% in 2020-2022 Personal consumption expenditures (PCE) inflation was 0.5% in May and CPI was 0.6% in June); the crisis has disrupted both supply and demand. However it may have accelerated a number of trends that could bring about higher inflation over the medium to long-term. Market expectations of inflation as derived from yields on inflation-linked bonds have bottomed out and are rising. Having laid bare inequalities in the provision of health care and exacerbated widening wealth inequality (although government assistance to households focused substantial resources towards those on lower incomes), the crisis could also lead to pressure for higher public spending, greater state involvement in the economy, redistribution of incomes and moves to strengthen workers’ bargaining power.

The aims and policies of the Fed and Treasury have so far complemented each other. Longer-term, a resurgence of inflation might call for a rise in interest rates, potentially even bringing the goals of the Fed and the government into conflict, and adversely affecting debt dynamics, although this is not Fitch’s core forecast. It is a truism that the U.S. government cannot run out of money to service its debts. However, there is a potential (albeit remote) risk of fiscal dominance if debt/GDP spirals, posing risks to U.S. economic dynamism and reserve currency status.