Social media beast Facebook reported better than expected first quarter earnings after the close Wednesday. $FB has been under pressure since the data privacy scandal broke andconcerns over engagement. The stock rallied over 7% after the release however.

Social media beast Facebook reported better than expected first quarter earnings after the close Wednesday. $FB has been under pressure since the data privacy scandal broke andconcerns over engagement. The stock rallied over 7% after the release however. “Despite facing important challenges, our community and business are off to a strong start in 2018. We are taking a broader view of our responsibility and investing to make sure our services are used for good,” said Facebook CEO Mark Zuckerberg. 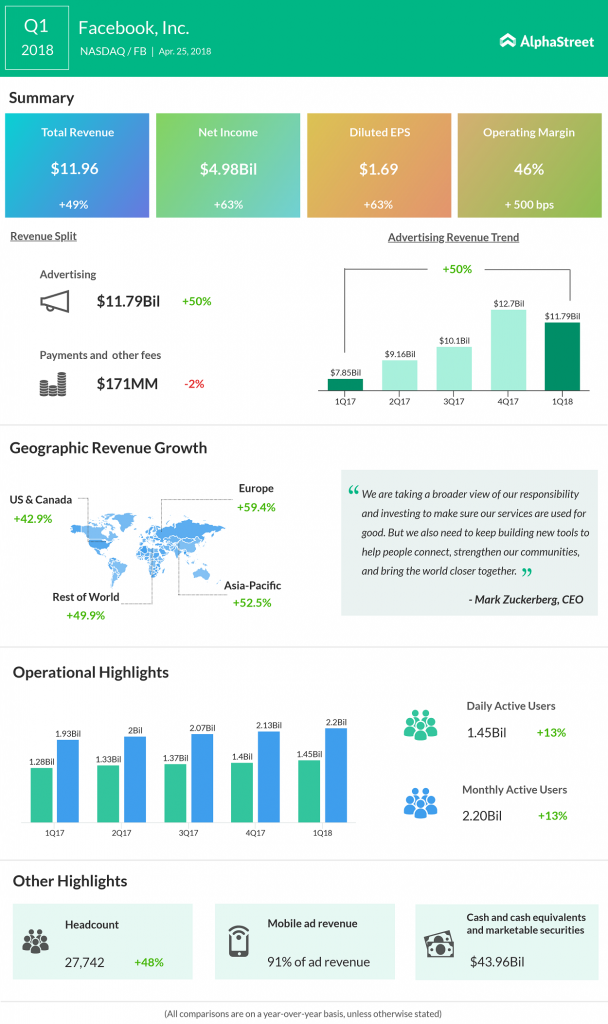 The seeming demise of $SNAP has also helped Facebook’s cause. By last June Facebook’s Instagram Stories feature had grown to 250 million users which has further undermined its chief competitor, Snapchat $SNAP. This was up from 200 million in mid-April. Snap ended Q117 with 166 million users which was up 36% from the year-ago quarter.

Stories was added in August 2016, is a feature inside Instagram. $FB has in this time copied the most popular features of Snapchat. Instagram has over 700 million monthly users, doubling in just two years.

How pervasive are these internet monsters  in our lives?  A report from Research firm Comscore ranking online hits on mobile devices and computers gives us an idea. The growth of Facebook is a cultural phenomenon, last month $FB reached 2 billion monthly active users, doubling its base in just 4 1/2 years. The Q117 earnings number was 1.94 billion monthly active users.

Live from The Pit