ECB left rates unchanged as expected in December in the forst month of controversial Christine Lagarde at the helm. The bank left deposit facility interest rates at .50% and held steady rates on the main refinancing operations and on the marginal lending facility unchanged.

ECB left rates unchanged as expected after last month cutting deposit facility interest rates 10 bps to .50% and holding steady rates on the main refinancing operations and on the marginal lending facility unchanged. Sees rates at present or lower levels until near inflation goal NB LTRO (Targeted Longer-Term Refinancing Operations) is best described as a long term loan to banks to increase loan creation. The banks lend above a specified benchmark and borrow from the ECB at a negative rate. This will provide an incentive for the banks to lend and thus increase private spending in the economy. That’s the theory clearly has not been a great success so far.

Full statement by the ECB: 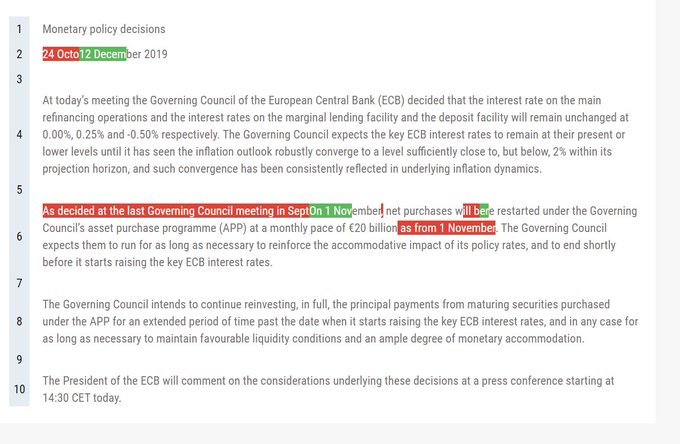 The President of the ECB will comment on the considerations underlying these decisions at a press conference starting at 14:30 CET today.”

The statement of President Lagrade ahead