Nike reported much stronger earnings than expected after the close Thursday.  $NKE shares spiked 6% higher on a recovery in the North American segment, a $15 billion share buyback with strong guidance going forward.

Nike reported much stronger earnings than expected after the close Thursday.  $NKE shares spiked 6% higher on a recovery in the North American segment, a $15 billion share buyback with strong guidance going forward. Nike recorded revenue growth in Europe and the Middle East, with the strongest performance in China.

Nike had gone through eight consecutive quarters of gross margin declines, to recover with a reported 60 basis point increase in gross margin coming in at 44.7%, driven by higher average selling prices and helped by margin expansion in the company’s NIKE Direct initiative. Lululemon and Under Armour had seen similar strong results from changed selling initiatives.

$NKE North American sales growth began slipping last May, when it posted flat results and in Q2 North America sales fell 5%. Adidas has been gaining it’s US market share by with new and differentiated products, reacting quickly to market demand. CEO Kasper Rorsted outlined a clear strategy and the company saw it’s sales surge 74% year-over-as of May. Both Nike and some analysts see Nike recovering in North America which has finally happened this quarter. 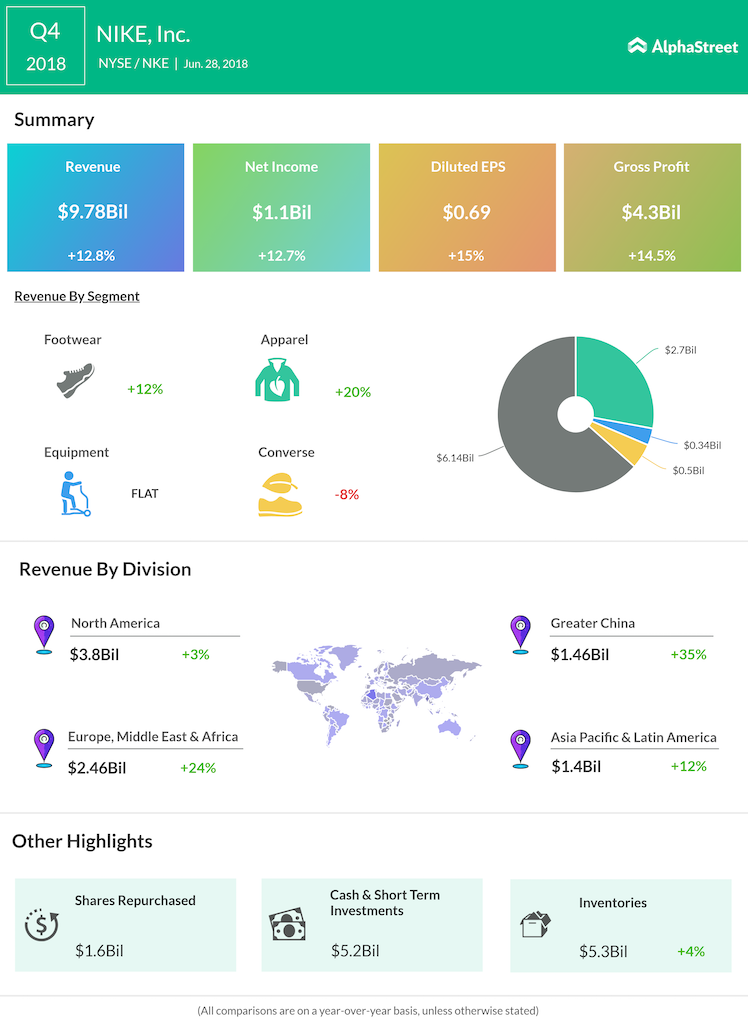 Nike also announced a new four-year $15 billion program to repurchase Class B common stock. The buyback will begin after the company finishes a $12 billion repurchase program, which it said it anticipated completing in fiscal 2019, or next May. That brings the total to a hefty $27 billion dollar stock repurchase.

Nike’s newly released footwear including the Air VaporMax Flyknit and Air Max 270 were well received by retailers including Foot Locker, according to the Telsey Advisory Group. Analysts at Susquehanna said recent channel checks showed these new products retailed well, according to Bloomberg.

“Our new innovation is winning with consumers, driving significant momentum in our international geographies and a return to growth in North America,” Mark Parker, Nike’s CEO, said in the earnings statement.

Nike are optimistic consistent release of new styles and colors for its popular VaporMax and Epic React models should support accelerated sales growth.

Nike had been hampered by the probe into misconduct claims at Nike and the abrupt resignations of brand president Trevor Edwards and VP Jayme Edwards. The surprises at Dicks $DKS and Foot Locker $FL combined with World Cup soccer and MLB season optimism gives Nike a low bar to get over. With regard to the Nike controversy, we are deep into World Cup 2018, excitment is strong, dramas are put in the back pocket for now. Nike women’s apparel appears unaffected by these controversies also.