Consumer electronics giant Apple reported better than expected June financial results on Tuesday after the market close. Negative sentiment had swirled around Tech since $NFLX, $FB and $TWTR crashed 20% or so.  $AAPL delivered on China and excitement for NEXT iPhone.

Consumer electronics giant Apple reported better than expected June financial results on Tuesday after the market close. Negative sentiment had swirled around Tech since $NFLX, $FB and $TWTR crashed 20% or so.  $AAPL delivered on China and excitement for NEXT iPhone. Apple reported earnings of $2.34 per share, riding on a revenue hike of 17% to $53.3 billion. Earnings for the third quarter improved 40%, surpassing analysts’ expectation of $2.18 per share. Revenue also beat Wall Street expectations, which was projected to be around $52.34 billion.

“We’re thrilled to report Apple’s best June quarter ever, and our fourth consecutive quarter of double-digit revenue growth.” “Our Q3 results were driven by continued strong sales of iPhone, Services and Wearables, and we are very excited about the products and services in our pipeline,” CEO Tim Cook said. Apple reports Fiscal Q3 earnings on Tuesday, July 31 after the market close. According to FactSet, analysts are looking for earnings of $2.16 a share. The big mover however will be what $AAPL says about the next iPhone, analysts will be looking for any clues from CEO Tim Cook. The September quarter also usually includes the first week or two of new iPhone sales.

Apple’s biggest earner is still the iPhone, in the second quarter, it sold 52.2 million iPhones, which accounted for 62 percent of sales. (Services, Macs and iPads and “other products” like AirPods contributed to the rest of revenue).

For the third quarter analysts estimate Apple sold 41.8 million iPhones, according to Sacconaghi. That’s compared to 41.03 million in the same quarter in 2017. Sales are projected to be $52.3 billion, up 15 percent from a year ago, according to Zacks.

Back to the new phones, Apple is expected to introduce three new iPhones in September, talk of a phone larger than the iPhone X and another that’s much less expensive. The iPhone is now a stable business, rather than the outside growth driver.

With so many iPhones out there, Apple’s services business such as the App Store, Apple Music and iCloud is the outside surprise now,  In the second quarter, Apple’s services revenue rose 31 percent to $9.19 billion while iPhone unit sales rose just 2.8 percent.

Earnings per share of $2.73 beat expected $2.67, adjusted, expected by Thomson Reuters consensus estimate. Revenue of $61.1 billion beat $60.82 billion expected by Thomson Reuters consensus. $AAPL’s disappointing sales of the iPhone 8 and iPhone X coupled with weak results from Apple supplier TSMC in the first quarter had turned investors negative into Apple’s latest results. $AAPL’s share price has fallen eight per cent over the last week, slicing over $60bn from its valuation. 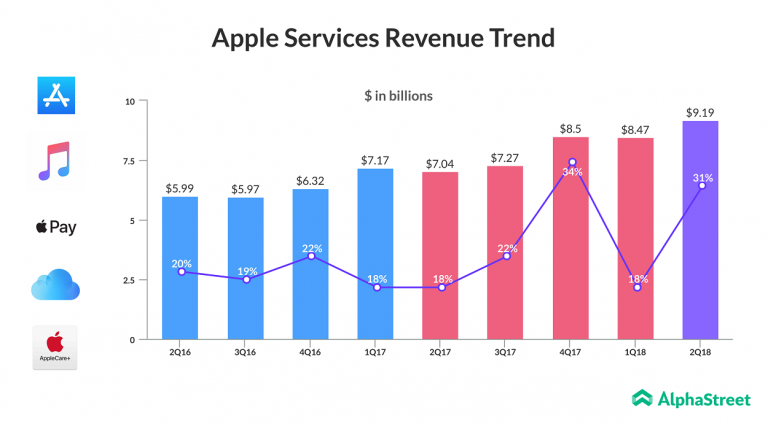 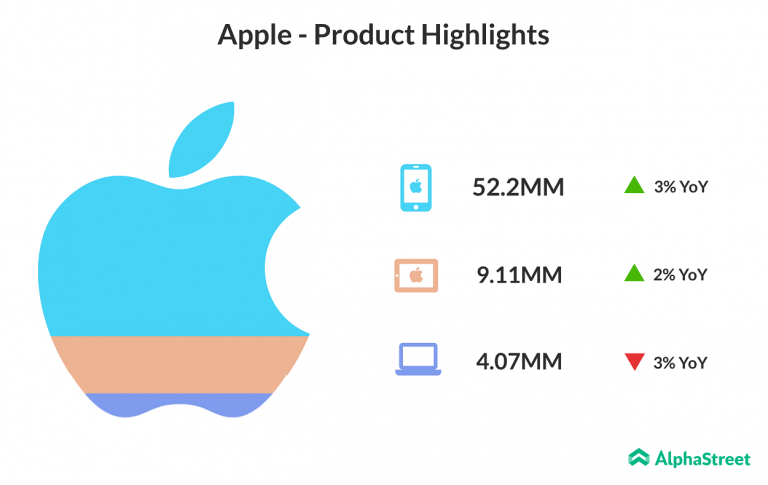 Apple has steadily increased its dividends since its 2014 stock split. Apple said last quarter it had returned $248.4 billion in total capital to shareholders, and anticipated that figure would hit $300 billion in through March 2019.

The high price tags of iPhones and only evolutionary incremental functionality  has seen phone replacement cycles lengthen. How much have the news flow of weakening smartphone sales, especially for its flagship iPhone X been built in? Analysts were expecting Apple to guide lower for the June quarter. $AAPL will launch its 12th-generation iPhones in September.

It’s not all about iPhones, and even so  gross margins to remain relatively flat at around 38 per cent. Apple has seen soaring revenues from service and also sees benefits from recent U.S. tax cuts. The tax rate drops from 22 per cent last year to just 15 per cent this year. These changes will lessen the firm’s reliance on the iPhone.

Cook said in January, Apple achieved an installed base of 1.3 billion devices, and “That’s an increase of 30% in just two years, which is a testament to the popularity of our products and the loyalty and satisfaction of our customers” .

In 2017 Apple outperformed since the Donald Trump Election victory there has been a run higher on Apple, this in turn has helped fuel the run in the S&P 500, Nasdaq and Dow Jones Index to Record highs.

How Much Will Component Cost Rises Effect Profit Margins

For the same reason we have seen NVidia, Intel, Micron and ADM Micro shares surge it is not good news for Apple,  it affects their margins.  The chip stocks have benefited from the demand for DRAM and NAND chips. Demand from Gaming and digital currencies have added to already strong demand from smartphones and cloud computing.