Coal has been the dirty relation in energy for a number years now as renewables and natural gas continue to dominate. Mines have closed, plants have shut so it’s no surprise the EIA reports in August 2017, coal stockpiles at electric power plants were 144 million tons, the lowest monthly level since late 2014.

Coal has been the dirty relation in energy for a number years now as renewables and natural gas continue to dominate. Mines have closed, plants have shut so it’s no surprise the EIA reports in August 2017, coal stockpiles at electric power plants were 144 million tons, the lowest monthly level since late 2014. U.S. coal-fired power plants typically follow a seasonal pattern of increasing during the spring and fall, when electricity demand is relatively low, and decreasing during the summer and winter, when electricity demand is relatively high.

With seasonality coal stockpiles typically reach their lowest point in August. Around Early November is when the bets go on generally in the energy markets such as natural gas and coal that their will be a cold winter. We already have weather providers using those two words “polar vortex”. 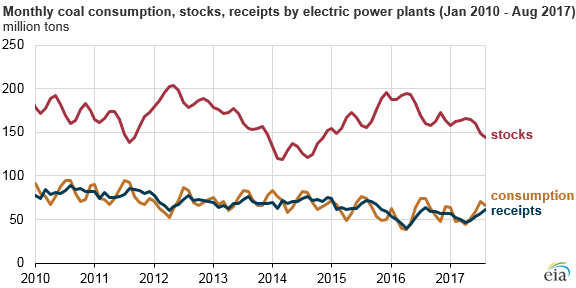 Like all energy sources coal plants generally stockpile much more coal than they consume in a month. Today’s natural gas storage report form the EIA shows the amount of working gas on hand.

Coal consumed by power plants follows the seasonal pattern in overall electricity generation, meaning coal consumption is typically highest in summer and winter months and lowest in spring and fall months. Coal receipts at power plants fluctuate less than consumption, but they have averaged 53,000 tons in each month of 2017, slightly lower than the average monthly consumption rate of 56,000 tons, based on data through August.

Coal receipts are less variable than consumption because the producing mines and coal transporters (mainly railroads) generally require power plants to receive coal at a roughly constant rate during the year.

In addition to surveying coal stockpile levels, EIA also calculates how long these stockpiles would last assuming no additional coal was received. This value, known as days of burn, considers each plant’s current stockpile level and its estimated consumption rate in coming months. EIA estimates the historical burn rate by averaging the most recent three years of historical data and applying that to the upcoming months. 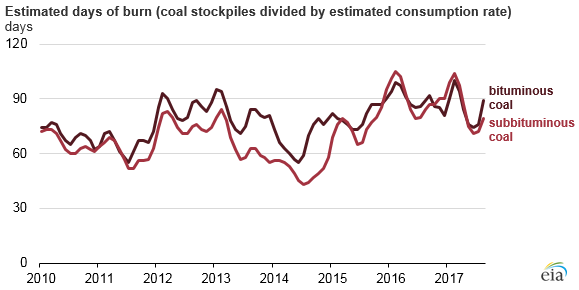